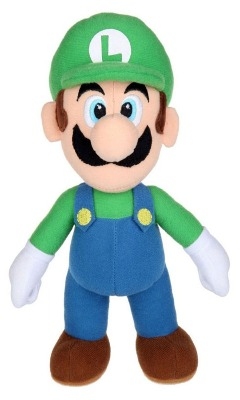 Luigi - A Soft Plush Toy of the Famous Game Legend.  9cm high. (A Bit of Mario history below).

A soft and cute collectible charactor.
A must-have for any Super Mario Fan!

It's the biggest game series of all time, and Super Mario is over 25 years-old.

Mario was created by Shigeru Miyamoto and appeared in the game designer's first ever title, the 1981 arcade platformer, Donkey Kong. Miyamoto was hired as a graphic artist by Nintendo in 1977, and was given the task of designing a game after several of the company's early coin-ops had failed to make an impression on the lucrative arcade market. Donkey Kong was created using the hardware behind an older arcade title named Radar Scope, which sunk without a trace in the US. Miyamoto ditched the shooting theme and added an ape and rolling barrels. Success naturally followed.

Mario was originally known as Jumpman. However, when Nintendo's US office were trying to think of a better name in time for the American release of the game, they were interrupted by their landlord Mario Segale, after whom they christened the character.

Mario was originally a carpenter, not a plumber. He's also appeared as a doctor in the 1990 puzzle title Dr Mario and its sequels.

The look of Mario is all about the graphical limitations of the hardware at the time. He has a hat, because realistic hair was difficult to portray, a moustache to accentuate his nose, and dungarees to make his arm movements more noticeable. In Super Mario Bros, he wears a brown shirt below his overalls – a look that was swiftly abandoned.

Donkey Kong Jr, the 1982 sequel to Donkey Kong, is the only game in which Mario officially stars as the antagonist. He has trapped poor Donkey Kong in a cage and the ape's son must rescue him. In the game's promotional material, Mario even gets a specially twirled moustache, highlighting his evil nature.

In contrast, Bowser, the key antagonist of the Super Mario Bros series, has also appeared as a good guy. He helps Mario in the 1996 title Super Mario RPG: Legend of the Seven Stars.

Bowser was originally sketched as an ox by Miyamoto, but his drawings were misinterpreted by animator Yoichi Kotabe as a turtle. The duo worked together on the latter idea and the Bowser we know today was born. He's definitely a turtle, though, and not a dragon as some assume.

The first Super Mario Bros game has sold 40.24 million copies, although that figure is skewed by the fact that it was bundled with the Nintendo Entertainment System console. It was until recently, however, considered the best-selling game of all time. It has been pushed into second place by Wii Sports on 41.65 million units.

Super Mario Bros was the first game to be set in Mushroom World, Miyamoto's long-running and ever-evolving fantasy kingdom. When Mario 'eats' a super mushroom he grows in size and ability. Miyamoto denies that he was influenced byAlicein Wonderland, and instead claims the idea came from enchanted foodstuffs in myths and folklore.

In the 1984 Nintendo Entertainment System game Golf, Mario made his first appearance in a sports sim. Kind of. The original character merely resembled Mario, while the later NES Open Tournament Golf specifically featured Mario as a golfer. He appears on the cover in red and white striped overalls, with a blue starry shirt. An awesome outfit.

Nintendo composer Koji Kondo provided the iconic soundtrack to Super Mario Bros. The main theme, known as 'Ground Theme', is one of the most recognisable pieces of game music ever recorded. The tune remained in the Billboard ringtone charts for 125 weeks and has been performed in concert by live orchestras.

The original Super Mario Bros 2 was designed as a tougher version of the first game and released to support the Famicom Disk System, a new add-on for the Japanese version of the Nintendo Entertainment System. It was considered too difficult for Western release, though, so the US and Europe got a tweaked version of the 1987 title Yume Kojo: Doki Doki Panic instead. The game was hastily refitted with Mario characters in a sort of digital cut-and-shut job. In 1993, the genuine SMB2 was finally released in the West as Super Mario Bros: the Lost Levels, part of the Super Mario All-Stars collection.

A Q Score survey in the early nineties revealed that Mario was more recognisable to American children than Mickey Mouse.

Footage from Super Mario Bros 3 appears in the climatic scene of appalling 1989 movie, The Wizard, about an emotionally withdrawn gaming champion. As this was the first chance that US Nintendo fanatics would get to see the game, the movie effectively acted as an advert for the release.

The new Chain Chomp enemies in Super Mario Bros 3 look like steel black balls with razor sharp teeth. They were inspired by an incident in Miyamoto's childhood when a neighbour's dog chased the terrified genius, before it was yanked back by its chain.

Elsewhere, the Whomp characters from Super Mario 64 were inspired by a mythological being known as the nurikabe, a 'wall ghost' that misdirects or impedes travellers at night.

. ...and the versions of the ghostly Boo enemies found in Super Mario 64, are based on the wife of the game's co-designer Takashi Tezuka. As Miyamoto explained in an interview with Nintendo Power magazine: "Mr. Tezuka got an idea about putting his wife in the game. His wife is very quiet normally, but one day she exploded, maddened by all the time he spent at work. In the game, there is now a character who shrinks when Mario looks at it, but when Mario turns away, it will grow large and menacing."

The 1993 movie, Super Mario Bros, was Hollywood's first attempt to create a video game tie-in. Starring Bob Hoskins and Dennis Hopper it was a critical and commercial failure, which conspired to give the game a darker, more adult veneer. Apparently, Dustin Hoffman was interested in the role of Mario as his children were fans of the game.

Since 1995, the voice of Mario has been provided by American voice actor Charles Martinet. He also voices Wario and Luigi.

The Wii hit Super Mario Galaxy was inspired by a tech demo known as Super Mario 128 shown at the Nintendo Space World event in 2000. The demo showed dozens of teeny Marios walking around on a slightly curved surface. During the Gamecube era Galaxy designer Yoshiaki Koizumi thought that entirely spherical levels would make an interesting environment for Mario, but Miyamoto was apparently unconvinced at first. Finally, Koizumi showed off several test levels and the project was greenlit for Wii.

The Super Mario bros series is in the Guinness Book of Records as the most successful gaming franchise of all time. It now boasts global sales of over 240 million units.

Mario has appeared in over 200 video games.