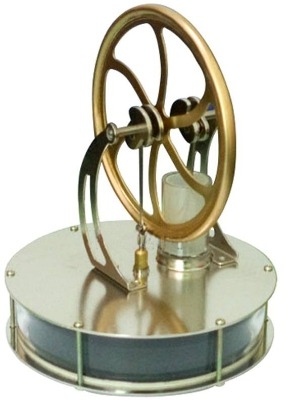 A Stirling engine is a heat engine that operates by cyclic compression and expansion of air or other gas, the working fluid, at different temperature levels such that there is a net conversion of heat energy to mechanical work. The engine is like a steam engine in that all of the engine's heat flows in and out through the engine wall.

This is traditionally known as an external combustion engine in contrast to an internal combustion engine where the heat input is by combustion of a fuel within the body of the working fluid. Unlike the steam engine's use of water in both its liquid and gaseous phases as the working fluid, the Stirling engine encloses a fixed quantity of permanently gaseous fluid such as air or helium. As in all heat engines, the general cycle consists of compressing cool gas, heating the gas, expanding the hot gas, and finally cooling the gas before repeating the cycle.

How does a Stirling Engine work?

The Stirling Engine requires a temperature difference between two plates in order to run. In this case the plates are made from steel. This is a good choice because steel is highly conductive.

The gap between the two plates is sealed, containing a fixed volume of air. As the bottom plate warms up, the air between the plates expands, pushing up the piston that seals a hole in the top plate. This piston is attached to the flywheel by a metal rod.

As the piston rises, the flywheel is turned. The movement of the flywheel in turn pushes down a second rod which is attached to a displacer sitting loosely between the plates. As the displacer moves downwards, it pushes air away from the hot bottom plate and up to the top plate, which is cooler. This causes the air to contract and the piston is pulled back down again, turning the flywheel further.

The turning flywheel raises the displacer again, pushing air back to the hot plate, and so the cycle continues while there is still a sufficient temperature difference between the two plates.