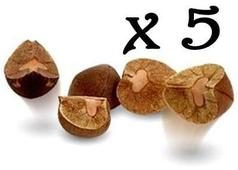 Packet of 5 Mexican Jumping Beans. These beans are seasonal.

These little beans contain a small moth lava, and when the bean becomes warm, the bug inside twitches to move out of the heat. Before ordering, please read the information below.

A Mexican jumping bean is an occurrence native to Mexico, where it is known as Frijoles saltarines . Physically, Mexican jumping beans resemble small beans, tan to brown in colour. They are a seed pod through which the larva of a small moth has chewed. The bean "jumps" because when it gets in a hot place the larva snaps its body hoping to roll to a cooler place. The beans are from a shrub often referred to as the jumping bean

After the egg hatches, the larva eats away the inside of the bean, making a hollow place for itself. It attaches itself to the bean with many silk threads.

The larva may live for months inside the bean with varying periods of dormancy. If the larva has adequate conditions of moisture and temperature, it will live long enough to go into a pupal stage. Normally, in the spring, the moth will force its way out of the bean through a round "trap door", leaving behind the pupal casing. The small, silver and grey coloured moth will live for only a few days.

The larvae jump as a survival measure in order to protect themselves from heat, which can cause them to dry out. The heat from the sun stimulates them to jump, even in cool temperatures. Leaving the beans in the sun for extended periods, however, will dehydrate and kill them.

When the bean is abruptly warmed (by being held in the palm of the hand, for example) the larva twitches and spasms, pulling on the threads and causing the characteristic hop. "Jump" is often an exaggeration, but the bean does noticeably move around.

The beans should become active if one holds them in the hand for a few minutes. The beans should also appear to be a very slight shade of green on the side. If the bean starts to turn brown, that indicates it is dying. If one shakes a bean near one's ear and hears a rattle inside, the larva inside has either died or entered the pupal stage where its hardened shell makes a softer rattle.

Jumping beans are still available for sale around the wortld. In the UK, they were a common novelty item in the 1950s.

A plastic toy under this name was manufactured and sold in packages containing several devices in the 1960s. It resembled a "time release" capsule and had a metal ball inside. When the surface on which the capsule was laid was tilted, the ball would roll to the other end and make the capsule twitch.

To rehydrate the beans, they need to be soaked, but not submerged, for a three-hour period in chlorine-free water once or twice a month. The chlorine found in tap water in some locales will kill them. Alternatively, let chlorinated tap water stand in an uncovered glass for about six hours before using to let the chlorine dissipate. Just spraying the beans with a little water is ineffective in maintaining the larvae's lifespan. Beans should be stored in a cool, dry place, but freezing will kill them.

If beans are shaken too hard, they will sometimes stop movement for a short amount of time as a defense mechanism.